The Amorphous Fields are an unusual region in the Beyond. It lies on the southeast end of the Divided Seas. 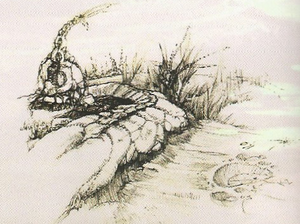 Stretching for more than 200 miles across the mostly open plain, the Amorphous Fields churn, twist, and undulate in dangerous, unpredictable ways. The fields are a strange mixture of rock and earth that moves and churns almost like a semisolid substance, with pockets of organic soup that occasionally harden into a slid or semisolid form, making the region a place where organic and inorganic masses undulate together. It goes without saying that the fields are extremely dangerous to cross. With no warning, the ground at your feet can turn to pools like quicksand, rise up with a sudden thrust, or open like a yawing chasm. Explorers who have spent time here speculate that the Amorphous Fields are actually a solid or semisolid crust over a viscous sea of organic liquids. A few even suggest that the region is a single living entity.

No normal plants grow in the Amorphous Fields, but here and there clouds of fungal spores find purchase on a solid or semisolid surface and quickly brow bulbous gardens of fruiting bodies found nowhere else in the world. Some of these are poisonous, but a few have valuable medicinal effects.

Understandably,hardly any people or creatures live in the area.However, the region does host a few natives, most notably the Iigoshi, which appear to be house-sized bioluminescent jellyfish that swim in the liquid soup beneath the ground and emerge when the crust breaks opens into a semisolid pool. The Iigoshi near the surface produce lighter-than-air gasses so that when they burst forth they float into the air, sometimes for hours at a time. Although they subsist on the organic materials found here, they seem to enjoy wrapping their long, paralyzing tentacles around creatures from other realms who've wandered into the wrong place.

A small number of hardy human settlements exist on patches of continuously stable ground, like islands in the churning soup. These people know (mostly) safe routes across the fields and hunt the Iigoshi as well as gather the valuable fungus that grows here. Most outsiders consider them insane.[1]

Other Points of Interest[]

Sometimes, gigantic, egg-like capsules emerge from beneath the Amorphous Fields. When one of these eggs bursts, a strange creature is found within. Many people believe the creatures come from various points in the world's past. Recovering an egg and bringing it out of the fields before it hatches might be a task that a biologist or scholar would find extremely valuable.

The people in and around Tastim, a large town south of Hayrest, have had enough of their tight-fisted, law-breaking rulers and want to overthrow them. However, to do so, they need weapons, organization and, perhaps most of all, a champion.

The village of Torin, southeast of Vebar, has been discovered abandoned. While all the buildings are intact, every inhabitant is gone. A strange greenish mist clings to the ground in places, but there are no other clues as to what might have happened here.

On very rare occasions, melon-sized spheres of red metal, covered with lights and what appear to be sensors, fly over the Amorphous Fields, seemingly searching for something.

At least one of the fungal patches growing amid the fields is intelligent, communicates via spores, and has a sporadic knowledge of the last few million years of history.

Within a village at the western edge of the Amorphous Fields, the local Aeon Priest clave has discovered the means to make gravity-defying harnesses in large numbers. Everyone in the village has one, so all residents float and fly - continuously.[2]