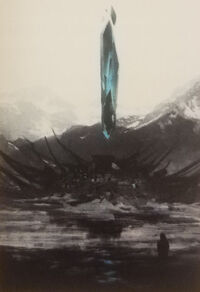 Gtharren is named for its most striking feature massive floating crystal, which stands approximately 50 ft. tall and 20 ft. wide. An artificial construct by nature, people will often come to the valley in order to break off shards from the crystal in hopes of siphoning some of the power within. However, many are turned away from the valley's caretaker, an old man named Phiraster. Stories abound of how Phiraster is some kind of wizard or demon, but in actuality he's nothing but an experienced Nano who wields incredible power. While he might seem insane, he nevertheless forbids anyone from entering the valley without answering the questions he asks. Those that refuse are often driven off through the usage of his many artifacts and esoteries. The Questions themselves range from personal inquiries into the visitors themselves to even strange riddles or koans, there are even times when he'll forgo questions altogether and task the visitors with something specific.

Those who do what he wants, and to his satisfaction, are rewarded with the opportunity to obtain a shard of the Gtharren Crystal. This is because the crystal itself is imprinted with memories and personalities of millions of intelligent beings that span many eons, with a single shard containing a hundred or so of these beings. Despite the memories themselves still remaining inaccessible to bearers, the shards are more likely than not used to interface with and control all sorts of devices, even those long since inactive, via the power contained deep within their intricate crystal lattice.[1]