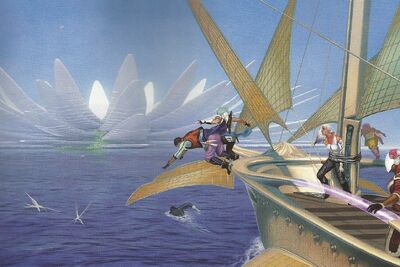 The Island of Undoing is a large, metal island located within the Sea of Secrets, about 250 miles northwest of the Island of the Last Migration.

In the dark of the night, the grind of metal against metal within within the sea. The hollow thunk of two boulders being smashed beneath the waves. The low squeal of wires flowing over with water. Repeated over and over until they mash together into a song that's impossible to ignore. To anyone nearby, the sound of the island is the sound of a siren's call, metallic and melodious. the first whisper from a new lover. The final death rattle of an old enemy. The lullaby of a parent long dead.

The island of undoing isn't really alive, but it definitely sounds that way to those within hearing range. The metallic island's long echoing sound is irresistible, and the theories are many: That the ghosts of the past and present selves walk the island's glass and metal shores, haunted by their own failures. That every morning an ancient monster among the machinery unspools; tangling itself in the thoughts and fears of those within reach, and then constructs irresistible songs from said fragments. That the island itself is the predator, a trap built long ago to lure beings that no longer exist within the Ninth World.

But whatever the purpose or plan, the island's call is irresistible to any within it's nearby waters. Vessel captains on course for farther seas suddenly find themselves turning toward a length of red and grey upon the water. Those with access tot he ship railing find themselves jumping overboard in the reddish-tinged water around the shore. Most will never make it; the plentiful food source has also created a plethora of daytime predators that circle the waters, always on the lookout for the next batch to fall prey to the island's call.

Those that become entangled within the auditory net and actually manage to set foot upon the island during daytime might be surprised to find that nothing more than dangerous flora and fauna awaits them. (And while these elements are dangerous, they're no less so than one might already expect given the way the floating structure beckoned the visitors ashore.)

As night falls, however, visitors will quickly discover the island's true threat: during the dark hours, it saps energy from living organisms to power its systems. The song ceases as the light fades, rendering the nights quiet and still that every shift, every step, every dying breath can be heard for miles. As it grows fully dark, the island will close up like flower, creating a seemingly safe space at its core - albeit one that would be almost impossible to escape from.

Still, regardless of the dangers, the Island of undoing can offer much in the way of discovery, opportunity, and fortune to those willing to seek it. The entire island seems like a giant machine, filled with hollows and hills ripe for excavation. The shores are actually strewn with wrecked ships, and the island's core is filled with the abandoned camps of those who were caught too long within its trap.[1]

Angusks are giant, reptilian creatures with four prehensile limbs and a large snout filled with multiple rows of teeth. Although they walk on only four legs, they typically have up to twelve smaller legs in various stages of growth. the lizards have evolved so that when the island pulls its energy from them, they're able to guide that leaching toward one of their legs. After a few nights, that leg withers and falls off, and a new one begins to grow. the following night, the island begins to draw from another leg.[2]

Cephaleen spiders, sometimes called god's assassins, are carnivorous spiders covered in golden-yellow hair. They can grow to be as large as a small seskii. The spiders each have a small purple marking along their abdomen; although it seems as if no two are alike, it's difficult to know for certain, as cephaleen spiders are exceptionally hard to kill.

They have two sets of fangs on the top of their mouth, so their bite leaves four perfectly lined-up puncture marks. After 28 hours, the skin around the bite swells and turns purple in a pattern that matches the one on the spider's abdomen.

Rather than build webs and wait for prey, cephaleen spiders spin out their webs like lassos, chasing down and catching prey on the run. Each round, they can run a short distance and throw their lasso web. They contain a biomechanical heart that restores up to 1n point of the spider's health per minute - more than enough to compensate for the island's effect.[3] 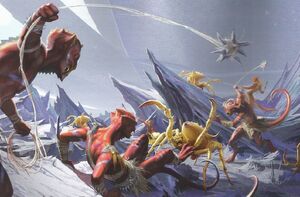 Known simply as them by most who actually talk about them, these abhumans live in the crevices and crannies of the island. They are heterogeneous, but most have flat, almost featureless faces and some type of tail.

Wildly bloodthirsty, zunak relish in hunting and killing merely for the sport of it. Typically traveling in groups ranging from 4-5, they sometimes join forces and hunt in packs that can be as large as twenty. their hunting cries are a complicated series of chilling call-and-response whistles and growls that carry for long distances across the island.

Zunak appear to have developed a tolerance for cephaleen spider poison and often tend to build their camps near the hairy creature's nests. Not only do they roast and east the arachnids for sustenance, but many of their weapons are crafted form scavenged webbing. Bows, snares, and nets are sometimes used, but the most common weapon is a web flail: a long bit of web with something heavy and spiked attached to the end of it. Zunak also use the webbing to weave their own clothing and bags.

Unlike other living things, zunak don't seem to be affected by the island's health-draining nature, either due to a natural resistance or a created protection against it.[4]

Other Points of Interest[]

A Carril was recently bitten by a cephaleen spider. He believes that since he's not dying the proper way, he's fallen out of his god's favor, so he seeks to forestall his death. He claims he can produce a large amount f antivenom - enough to even share - from a red sea star that's harvested just off shore.

A large ship crashed along the western side of the island. A group from Delormi is heading over to investigate. Half of them want t rescue any survivors, while the other half want to loot and pillage the wrecked vessel, any survivors be damned.

Along the southeastern shore lies a large block of what appears to be an extremely durable and strong ice that recently washed ashore. Anyone who dares attempt to break or move it will develop a sheen of frost over their skin for 28 hours.

At twilight on some evenings, a shimmering yellow arc will appear in the sky. Golden drops fall from said arc. Anyone touched by a drop will suddenly be overcome with an intense sadness for a previous crime, loss, or tragedy.[5]

Sewn lightning looks like a very elastic thread made of crackling blue light. If one pulls pieces of it apart slowly enough, it will eventually split into two threads. One can do this endlessly, as the original thread will never cease to diminish. Sewing the thread through fabric will require a needle made from either bone or stone. Touching the thread to a metal of any kind will "kill" the thread, causing it to dissolve in ash.[6]

Sailors have reported hearing the island's call from as far away as 3 miles off the shore. At that distance, though, the song is barely audible and seems fairly innocuous. To those caught by the song, the waters around the island will appear deep crimson. Those that are unaffected won't see the change in color.[7]

The Island's call will cause humans among other creatures to want to draw closer and closer. When characters come within sight or at least one mile from shore, whichever comes first, they must succeed on a difficulty 6 Intellect defense roll to resist. For whatever reason, those that have extensive mutations sometimes find themselves nearly immune to the call, even when they're very close to the shore. Those with more than one mutation have an asset in resisting it.[8]

Those that have the good fortune of killing a cephaleen spider, or even come across the dead carcass of one, can scavenge it for up to a hundred feet of strong, sticky webbing from inside the corpse. The webbing will provide an asset to any tasks pertaining to climbing.[9]