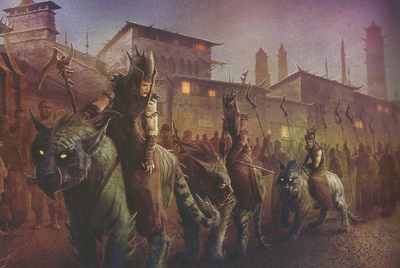 Lhauric is a city along the coast of Errid Kaloum, it's considered within the Divided Seas region. The city features a world tunnel that leads to the planet, Naharrai.

Probably the largest city in the Beyond, Lhauric claims a population of 80,000. This theocratic city-state is ruled by the Priest-King Tharimalles, speaker for the million gods of the Challifani. The people of Lhauric use both the Salter river and the Sere Marica to their benefit, working as fishermen and merchants. North of the city, they have built a number of gently turning mills on the river for processing grain, wood, cotton, and other commodities, including metal and synth brought in by the local drit sifters.

The streets of the central part of the city are paved in small pieces of volcanic glass, giving them a distinctive black sheen. The grey stone buildings usually rise two or three stones in height, though a few towers and grand buildings are even taller.

Deep below Lhauric is a hidden cavern. If you can fin this cavern, you will discover a huge pool 50 ft. across. A living creature lies within a pool, looking very much like a gigantic human brain. Tubes and cables run from the creature out of the cave, but were you to follow them, you would discover that they run back up to the surface of Lhauric - specifically, to a lower range of the Challifani Temple. The brain is a deranged biological construct from ancient times, and the Challifani are various facets of its fractured personality.

These gods demand blood sacrifice. They mandate that Challifani Priests and adherents practice flagellation, torture, and mutilation. The people of Lhauric believe that these horrific rites keep their gods happy and thus keep their city blessed. In reality, the Challifani have no power other than knowledge - the brains have sensors throughout the region and grants Tharimalles and the lesser priests scattered bits of information from its observations. These revelations, as well as the gods' gory commandments, come to the priests in the form of drug-induced visions that they receive while being tortured in the lowest portions of their temple.

After generations of commandments from the million gods of the Challifani, the people of Lhauric have grown accustomed to the bloody practices of their religion. In fact, many secretly or openly revel in the gore and violence of it.

The priests are men and women who command both terror and respect. Most are maimed and scarred fro their communal sessions with the brain. The priests, mounted on massive, tiger-like beasts called razorcats, lead their holy knights through the streets. Selecting victims as needed. To resist a priest, or to aid a chosen victim, is to oppose the divine will of the Challifani, a sin punishable by death and the assurance of a horrific afterlife.

In the Villages to the north and east of Lhauric, many people earn their living by sifting through the artificial soil and collecting valuable bits of metal and synth. They bring their valuable drit into the city in wagons. There, the materials are smelted or reprocessed so that they can be used by craftspeople or for manufacturing. Most of these sifters also worship the Challifani.[1]