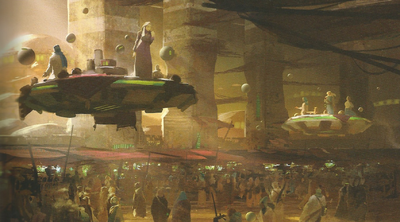 Orrila is a major city in the kingdom of Milave.

Orrila serves as the capital of a land that truly has none. A sort of microcosm of Milave itself, it's a cosmopolitan mishmash of cultures and people. A stone wall girds what is now the central portion of the city, but the city spread out from walls long ago with buildings of many different styles and materials. In very recent times, a large tent-city has grown around the southern gate of that wall, covering what's now known as the Field of Voices.

Much trading takes place within Orrila, thanks in no small part to a device located on a high campanile in the center of the old town. Known as the All-speech, the device automatically translates any word spoken within the city (and even a fair distance beyond) into a language understandable to each listener's mind. The All-speech has some interesting side effects, however. Some children reared in Orrila learn to speak far more quickly than expected, understanding the words of their parents even as infants, while others never learn because they're still understood even when speaking gibberish. A Milavian saying holds that lies are harder to tell in Orrila and secrets harder to keep, but this claim still has yet to be proven.

Thirty miles east of Orrila, workers toil in the floatstone quarries. You can spot the quarries from far away because of the vast tarps that catch the stone as it's dug up from the earth. The workers pull it from what looks like former monuments of some kind, buried in a long-forgotten age. Of course, the ground repels the floatstone, so much of what is excavated flies into the air.[1]