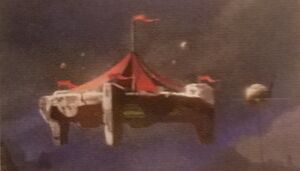 Ossam's Traveling Menagerie and Soaring Circus is an entertainment troupe that wanders around towns and villages throughout Milave and sometimes even through Ancuan.

While mostly consisting of wooden caravans containing a myriad of creatures and performers, Ossam's band of entertainers also hold a floating numenera platform that's used for transporting equipment as well as a hovering stage for when performances begin. No matter where they go, they always put on fantastic shows and earn shins while doing so. But despite much of its acts being real, conventional trickery, disguises, holographic illusions, or even using various numenera devices, don't lie outside their comfort zone, often being used to heighten the effects of their shows. One such example of this is with one of their more notable members, the "Great Theon", who uses "sorcery" that's mainly produced by some hidden devices, despite the man actually also wielding an array of psychic powers. His trained cragworms are merely holograms projected around otherwise trained seskii. Another example of this lies with the talented acrobatic "Kaprof Brothers", whose moranx harraspawn is actually a deformed aneen that's secretly camouflaged by holographic projections. [1]

Perhaps the greatest wonder of Ossam's circus would be its namesake himself, whose actually not human but rather a human-appearing construct that's older than the Ninth World itself. While his origins and motivations remain a mystery, he would literally kill to prevent others from revealing his secret, with only a few members of his troupe even aware of it. [2]