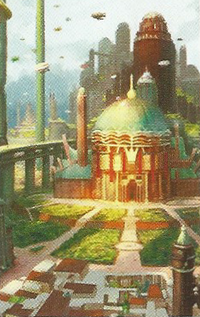 Qi is the biggest known city in the Ninth World and the capital city of Draolis.

Qi is the largest city in the Steadfast. It's also the site of the Durkhal, home of the Order of Truth and the Amber Pope himself.

More than half a million people live in Qi, a city of spires and fantastically huge helium or hot air balloons and dirigibles. The common saying "Half of Qi is in the sky" is an exaggeration, but it feels accurate when you're there.

The Durkhal complex at the heart of Qi is almost a city unto itself - a vast sprawl of libraries, laboratories, warehouses, living quarters, and administrative buildings. At the center of the complex is the holy palace, serving as residence and office of the Amber Pope. More than a thousand people work and live in the Durkhal.

Qi has many large markets, in particular along the docks. The multilevel central market - well away from the water - is thought to offer one of the most expensive and elite shopping opportunities in the Steadfast. Here, all manner of goods can be bought and sold, with no luxury too exotic or fantastic for one of its shops.

Many of Qi's central-most sections lie on multiple levels, with decorative bridges and raised walkways connecting the higher levels, and bright glowglobes illuminating the lower so that each level is equally lit and beautiful. Trees and flowering plants grow in well-tended plots and pots even in the most crowded areas of the city, including the sections that are dozens of feet above the ground. Larger parks and walled gardens are common as well. Neighborhoods, particularly in the central city, are often surround by walls to enclose the homes and their communal gardens. This practice can create urban rivalries and is quite unwelcoming to outsiders.

The people of Qi often travel by fashioned balloons and dirigibles. so there are multiple mooring platforms and high metal mass throughout the city. These aerial vehicles take passengers from place to place around Qi, to various outlying areas, and sometimes to ships moored well out into the harbor. They're rarely used for long-distance travel because - with a few exceptions that employ higher levels of ancient technology - the vehicles aren't capable of long journeys. Besides, most places outside of Qi don't offer the ability to moor or replenish what the airships need.

Although the city is elitist, not everyone in Qi is wealthy. On the contrary, those dwelling in the outer sections are often quite poor. They must contend with the difficult living conditions and even the high crime rates.

The elite peacekeeping force called the Zhev is composed of flying cylindrical automatons created by the Amber Pope more than a hundred years ago. The Zhev keep mostly to the central districts because they don't have the numbers to patrol Qi in its entirety. The city has grown in the past hundred years, and while the rulers have the ability to repair the existing Zhev, they lack the materials and skill to create new ones.

Dietha Marish is the head of the large, family-based criminal organization that runs much of the illegal activity in Qi. These transgressions mainly consist of robbery, smuggling, and buying and selling stolen goods, but murder by contract also falls within their purview. Dietha's family, called the Marish Clan by most people, is filled with some of the city's most dangerous individuals.

Marvyr Rann is the mayor of Qi, appointed by the Council of Spheres. He lives in a dirigible and never trods on the earth, believing that if he does, he will sicken and die. Rann is a frail and likely insane old man surrounded at all times by a cadre of nearly naked young men and women who tend to his every capricious whim. Fortunately for Qi, the city virtually runs itself, and the Amber Pope has the money, manpower, and influence to accomplish whatever needs to be done.[1] 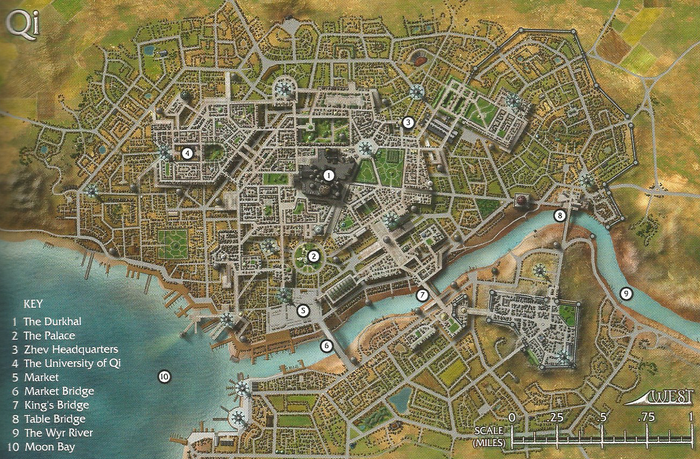