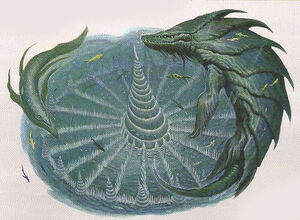 Salachia is an underwater city in the Divided Seas region.

Located at the deepest point of the Sere Marica, Salachia, commonly called the Salt City, is an immense underwater structure i the shape of a wheel. Covering more than 2 square miles and located at a depth of nearly 1,500 ft., the city is lightly populated, with fewer than 1,200 inhabitants.

Salachia consists of a large outer circle of what looks like enormous nautilus shells, which are connected to one bigger shell in the middle by a series of limestone tunnels, The entirety of the city is enclosed by a semiporous membrane that permits the passage of some gasses, but no liquids or solids.

The city's inhabitants live in the shells that make up the outer circle. Multiple families occupy each shell, using the individual chambers as their homes. The most prestigious family has the honor of living in the main chamber, which also happens to be closest to the tunnels.

All of the tunnels are built through a process that turns minerals in the saltwater into limestone.They average 10 ft. across and 15 ft. high, but they're jagged and sharp-edged from being built and rebuilt. Unlike the shells, the limestone tunnels must be repaired constantly, and sometimes they fall in at a moment's notice.

The massive inner shell is the city center, in more ways than one. All commerce, eateries, schools, and community gardens are located in the innermost shell.

The entirety of Salachia is covered in multiple layers of crystalline creatures that make the city seem to shimmer and writhe in the depths. These tiny masses, called chiffons, are no bigger than a human's hand and are attracted to the shellac of carbon dioxide released by the residents.As long as there is carbon dioxide for them to eat, the chiffons attach to the city's exterior and exhale oxygen back into the atmosphere.

Most inhabitants have no special water-breathing abilities or salwater skills. In order to leave Salachia, a resident must encourage a chiffon to seal itself across their mouth to provide oxygen. The only way to reach the surface is the hyponome - a long bubble tube - operated by a creature dubbed Sal. Sal is the city's protector, and those who wish to use the hyponome must get her permission or risk a malfunction during their journey through the tube.

Currently, the city's in something of a crisis: fewer Salachians are having children, and more young people are venturing out for other parts of the world - all of which means less carbon dioxide to attract the chiffons. The city's mayor and creator, Hiberz, recently passed a law forbidding citizens from leaving for more than two days at a time. He's also offering a bounty of 5 shins for every new citizen invited (or otherwise brought) to the city.

Hiberz is heralded as the savior and condemned as the executioner of Salachia. He's the one who discovered the process for turning saltwater into limestone, which allowed the city's original crumbling shell tunnels to be replaced with the current tunnels. Those who praise Hiberz consider him to be the city's leader, although he takes to the task with reluctant humility. Those who scorn him would prefer to see him dead so they might build the city properly, with tunnels that don't have such a high risk of collapsing.

Short and squat, with a bulbous nose and an overly small mouth, Hiberz spends most of his time in his laboratory at the center of Salachia. Hiberz rules when he must do so to preserve the city, but otherwise he prefers to study the compounds of the saltwater and minerals. He's addicted to huffing chiffons, which he believes increases the oxygen to his brain and makes him a better scientist.

Sal, the city's guardian, is a mollusk woman who resides in main chamber of the center shell, where the circle of the hyponome is connected to the much larger passage out of the city. although Sal's whole body is rarely seen, , those who visit her chamber might glimpse her reddish-brown head with overly large eyes on either side. Nearly a hundred tentacles writhe at the edges of her face, and she uses two of them to speak to others. By placing the tentacles on the sides of someone's face, she can pick up the other person's olfactory signals and understand their meaning. She responds through her own scent, which can be an unpleasant and confusing conversation for those not used to dealing with her kind.

From interacting with Sal, it's clear that she's ancient, but the passage of time is different for her than for others. She still mourns the loss of her real family - the original inhabitants of the shells - and keeps Salachia safe in the hope that they'll return to take their rightful places. (Whether she realizes that they're long dead is another matter.)

Sal protects the city structure at all costs, even if it means destroying the inhabitants. Those who wish to leave through the hyponome must provide solid reasons to do so. If someone attempt to use the hyponome without Sal's permission, they take 4 points of damage per round until they reach the surface of the lake. It takes four rounds to travel from the point of origin to the surface.

Calabe is the leader of the resistance group, those who wish to take back the city because they believe that Hiberz is destroying Salachia with his shoddy tunnels. Her father was killed when a tunnel caved in on him during the first of the Great Collapses. She was very young at the time and has harbored her bitterness like an oyster harboring a grain of sand. In every, Calabe is a stunning young woman, and she wields the power of her looks to gain more followers for her cause. She always wears a black cape with the hood up, perhaps tho highlight the breathtaking beauty of her face - or perhaps to cover the dual sets of gills located just behind her ears.

Despite Calabe's lack of training, her fierceness makes her a formidable opponent. In a confrontation, she first attempts to charm and soothe with her beauty. If that fails, she quickly becomes a dirty fighter, using whatever is at hand to attack.[1]

There are many companies that are more than willing to sell underwater breathing apparatus and airtight vehicles for a high price to those who wish to travel to Salachia. Unfortunately, that high price isn't guarantee that the devices will work below a few hundred feet.[2]