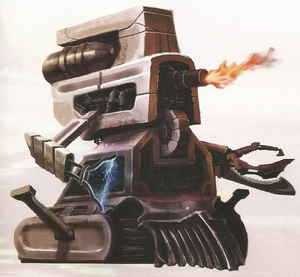 Sferics are expert machine crafters in the Ninth World.

A sferic is a 15 ft. tall automaton sporting a few large metallic limbs specialized for digging, several smaller limbs for grasping and cutting, and even a limb that can emit a concentrated tip of flame that seems as hot as the sun.

A sferic has a reputation for being a builder's dream, but relying one is far from safe. Give it a plan or, if you don't have one, tell it what you'd like to build. The sferic will then begin to build the requested device or structure, but it may request special components if the item requested is higher than level 5. At some point during the crafting process, it may also decided that it requires bio-circuitry and attempt to salvage it raw from whichever living things is closest.[1]

A sferic will usually prefer to avoid combat. However, if it decides to salvage bio-circuitry from a living creature, it extrudes tendrils at a target within immediate range. Each round, the chosen victim must resist the tendrils burrowing into their skull or lose their next turn and take 5 points of Intellect damage (ignoring Armor). Once a sferic inflicts 15 points of damage on a given creature, it will have the material that it desires, though the target will permanently lose 3 points from its intellect pool (if it even recovers at all).

If attacked, a sferic will ably defend itself through its digging and cutting implements, physically attacking every creature within immediate range as its action.

These creatures are perfectly amenable to negotiation and build requests. They don't volunteer the fact that they sometimes require bio-circuitry in return.

The PCs need bio-circuitry for a particular project, and they've learned that a creature known as a sferic is adept at salvaging that material in quantity.

Sferics can be salvaged for a few cyphers, 10 units of bio-circuitry, and perhaps even an artifact, each.[2]

Sferics know many plans, but extracting a particular plan that either a wright or other crafter can use is a long process involving communication and negotiation. Finalizing such a deal may require that a gift of "raw" bio-circuitry be bestowed upon the sferic.

Salvaging bio-circuitry from a normal living creature isn't something that just about any creature can do; it's a special ability that only the sferics possess.[3]