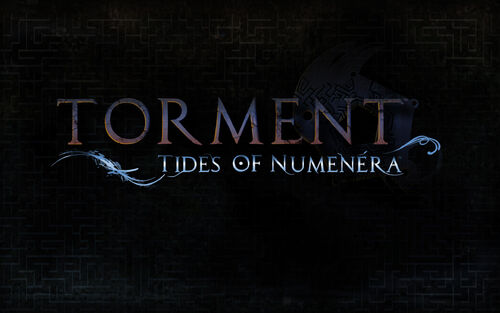 Torment: Tides of Numenera is a single-player role-playing game for PC, Mac, Linux, Playstation 4 and Xbox One. It was developed by inXile Entertainment and published by Techland Publishing. The game was released on February 28, 2017.

It is the spiritual successor to the 1999 video game Planescape: Torment, but doesn't share the same setting. Instead, it is set in Numenera, an original universe created by Monte Cook. The game was funded thanks to a Kickstarter campaign.

The player control a single main character (male or female), as well as several optional non-player characters. The game narrative is build upon four pillars: a deep and heavily thematic story, an unique setting, a very personal telling, and a reactive world, filled with choices and real consequences.

In addition to English, the game is available in French, German, Polish, Russian, and Spanish. It is available on retail, Steam and GOG.

Numenera is set a billion years in the future. Civilizations have risen and fallen on Earth. Even though the current inhabitants live at about a Medieval level of technology, the leftover remnants of these advanced societies lie all around them. Some of these are extremely helpful: advanced tools, valuable means of communication and learning, transportation, defenses, and weapons. Others are dangerous: genetically altered monstrosities, flesh-warping radiation, creatures transplanted from distant stars, and clouds of out-of-control nanobots, just to name a few. This setting, called the Ninth World, provides all manner of opportunities and challenges to those that call it home.

Most of the locations of the game will be located east of the Steadfast and the Beyond, the principal regions described in the Numenera Corebook. However, it is said that we will also visit other dimensions and distant worlds.

The player will control a character named the Last Castoff, one of many shell-bodies (Castoffs) rejected by the Changing God, a man that gained immortality through the power of Numenera by passing from a corpse to another, with each corpse gaining new consciousness when the Changing God departed from it. The action of the Changing God caused the awakening of an entity, The Sorrow, that has been pursuing him for quite some time. But not only him, his creations too, and among them, the Castoffs are also targeted by the Last Sorrow.

The game will set the player upon a quest to find his originator before The Last Sorrow can harm the Changing God or the Last Castoff. In this task, the player will find allies and enemies, with other castoffs on both sides. It will be possible to merge temporarily with the mind of those other castoffs through special Numenera, the Meres.

The game contains several game areas, located both in the Ninth World and outside:

The player can choose three companions to join with the Last Castoff. There is a total of six possible companions included in the game:

Torment: Tides of Numenera is an isometric roleplaying game, and like other games of this genre, its core mechanics consists of leveling and looting, through turn-by-turn tactical combat. Of course, that is only the basics, as the game offer way more than just fighting, with dialogues of great complexity, and exploration.

The combat works within a system called 'Crises'[1] who also implement elements outside combat, but who are still considered as encounters.

Several gameplay element of the game are shared with it's predecessor, Planescape: Torment. Concerning the skills and the leveling, the video game is to implement and adapt the gameplay mechanics of the pen-and-paper game mechanics.

The Tides system is an original gameplay element of the game. It works the same way as a Reputation system, but instead of being toward a faction, a Tide (there is five of them) is dedicated to a high concept, like passion, power, sacrifice or even greater good. It is one of the lasting effect of the player's actions, which determine the Legacy. Legacies are linked to the great interogation of the game, ' What does one life matter ? ', and is the way of the game to determine how the player is influencing people or even objects by it's presence and former actions through the game.

Crafting will be a part of the game.

The game is running on the Unity engine. It was decided that the game should follow the path of Planescape: Torment and depict area in isometric 2D, with 3D elements like the characters, interactive objects, etc.

The early screenshot and video prototypes showed to the public during the Kickstarter campaign were concieved by Koy vanOteghemn.

The soundtrack of Torment: Tides of Numenera is created by the composer Mark Morgan, who also composed the Planescape: Torment music.

The original plan was for a 40 minutes soundtrack, but the addition of game areas thank to the success of the Kickstarter campaign necessitated more music. In two occasions, the stretch goals permitted to add more music to the game.

In 2012, following inXile Entertainment's successful Kickstarter campaign for Wasteland 2, inXile writer Colin McComb discussed ideas for a hypothetical sequel to Planescape: Torment on his personal website.[2] Roguey of the RPG Codex community subsequently discovered that the rights to the Torment trademark had been obtained by Roxy Friday, LLC, an applicant linked to inXile CEO Brian Fargo.[3] Fargo replied, saying, "I commend the sleuthing abilities of the Codex. There are many other pieces to the pie on this project that I can't speak to yet which prevents me from much comment. I need to get the other elements in order so you can fully understand the detail, team, approach and reasoning first. There will lots of pleasant surprises but I had not planned on talking about it yet".[4]

In an interview with Eurogamer.net, McComb confirmed that the project was in early pre-production, and explained that Chris Avellone, Planescape: Torment's lead designer, had given it his blessing.[5] In a January 2013 interview with Rock, Paper, Shotgun, Fargo revealed that the Torment spiritual successor would take place in Monte Cook's Numenera setting; the Torment trademark did not include permission to use the Planescape intellectual property.[6] Fargo released the first piece of Torment: Tides of Numenera concept art in an interview with NowGamer[7]. On February 20, 2013, the official site of Torment: Tides of Numenera was revealed.

The Kickstarter campaign was launched on March 6, 2013, while Wasteland 2 was still in full production at inXile Entertainment (with a release planned for October). Well aware of that, the designers expected a longer than usual preproduction phase, who already begun before the Kickstarter. The production was planned to last 14 months, from November 2013 to December 2014. The developpers plan to use systems and tools from Wasteland 2[8]. And a deal was reached between Obsidian Entertainment and inXile near the end of the Kickstarter to share some tech systems (including Obsidian's dialogue editor) since both studios where designing CRPG on Unity[9]. When the campaign ended, they had recolted $4,188,927 thanks to 74,405 Kickstarter backers, with another 160,495 dollars given by 2,000 backers on Paypal. In addition to that, Brian Fargo and Steve 'Superfan' Dengler gave each one 100,000 dollars, mostly to offset possible failed pledges.

While the Kickstarter campaign was over, inXile continued to accept contribution through Paypal. At the end of April, the Paypal contributions was not enough to reach $4,5M and unlock the last Kickstarter stretch goal, but since Brian Fargo and Steve Dengler's donation was more than enough to compensate unpayed pledges, the money was added to the other pledges and the stretch goal was accordingly achieved.

A great number of writers are working on the game. Each one is dedicated to a particular game area or companion, with some constraints to follow to create a cohesive experience and under the supervision of Colin McComb, helped by Chris Avellone. They all met in July 2013 to discuss the story and exchange ideas. The first playable prototype was created in September 2013.

The success of the Kickstarter campaign forced inXile to reschedule the planned release date from December 2014 to the first half of 2015. Later, delays in the Wasteland 2 production led to the release date being moved again, this time to the last quarter of 2015. The preproduction phase, which was planned to end in November 2013, was extended in consequence.

In the beginning of 2014, inXile announced that they reached another agreement with Obsidian to license more of Pillars of Eternity technology, this time concerning the game 2D pre-rendered environments. The game did not entered full production before the release of Wasteland 2 in September 2014, however a transition phase, called limited production, began during the second quarter of 2014. By that time, only 20% of the budget had already been used. The limited production consisted in a continuation of preproduction while content was created in the game for the first time, and some staff from Wasteland 2 began to join the Torment development team. The first few months saw the creation of the 'Breach' (the codename for where the story begin), 'G1' (another codename for a small area linked to a Mere), and the Bloom.

The Torment: Tides of Numenera website was relaunched in September 2014, with a design by the new web developer at inXile, Jason Dora, one of the game's backer. A new backer system was introduced, based on inXile Points (XP), and a limited stretch goal was revealed for the Gullet: an area in the Bloom designed by George Ziets and who should have been cut if inXile was not able to expend its environment art team. The objective was fixed to $4.75M with a deadline for the middle of October.