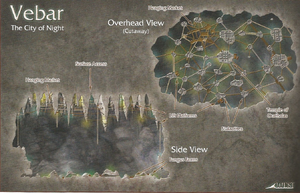 Vebar is a subterranean settlement within the Amorphous Fields.

Vebar is an underground city located in a vast artificial cave. The buildings are of ancient design and hang from the cavern's ceiling. The place is so old that limestone formations have begun to transform the city, making the buildings more like massive stalactites. Vebar is home to about 8,000 people, who enter and exit the city through a series of winding passages that lead up to the surface.

The populace moves around the city through tunnels at the top, above the suspended buildings, or on bridges and walkways that connect the structures below the level of the ceiling. Some people travel on cables and chains alone; just about everyone here is an adept climber. Vebarans like to decorate their city by hanging interesting objects from cords or chains, and the city is filled with dangling ornamentation.

Vebar, sometimes called the City of Night, is lit by a series of artificial lights positioned throughout its inverted thoroughfares. Most of the inhabitants have grown to dislike the surface, in particular the light of the sun. If they do visit the surface world, they prefer to go at night.

The people of Vebar farm fungi in the lower part of the cavern. They harvest it for food, textiles, and a wide variety of medicinal uses. Rope-and-pulley elevator platforms connect the buildings with the fungus farms far below. The farms are lit by glowblobes and other artificial lights, so that from the city, looking down, the bottom of the cavern seems like the night sky. Conversely, the farms look up at the city the same way.

Near the center of Vebar is a huge temple to the local god, Outhalas, and the homes of his blind-wife priestesses. Ourthalas is depicted either as a huge, spidery thing sprawling legs or as a tentacled monstrosity with many arms extending into the darkness. He's said to dwell in the "Cave of Life-Giving Shadow."

Dalthius, a well-known figure in Vebar, is an interesting man with mysterious origins. He was found inside a metal cylinder in a cave not far from the city. He seems to have difficulty in the open air and direct sunlight, so he remains in Vebar as much as possible. Dalthius is helpful, friendly, and like by everyone, and he's first to jump to the city's defense in times of need.[1]