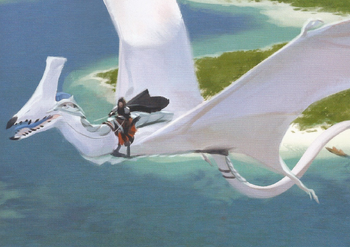 Xi-Drakes are large, flying creatures found within the Ninth World.

The largest thing to darken the Ninth World sky is the xi-drake, a massive, white-skinned reptile with broad wings, a long tail, and a large armored crest on its head. The creature is light for its size, and the crest has a unique organ that helps it to fly (though nobody knows how exactly it works).

Xi-drakes have keen senses, but more impressively, they can read the minds of any intelligent living creature at long range and thus are almost impossible to deceive. They breed rarely but have great longevity.[1]

Xi-drakes nest in mated pairs; otherwise, they travel the world alone or with a single rider/companion.

Long while flying; short while on the ground

Perception as level 6. All combat tasks against a living opponent as level 6.

Xi-drakes are straightforward combatants, attacking with a bite or claws, but since they read minds so easily, they use this information to aid in both their attacks and defense.

Xi-drakes are intelligent creatures. They can't speak (telepathically or otherwise), but their ability to read minds allows a sort of communication They're no so much tamed and trained as they are befriended.

Due to a pact made more than a century ago, xi-drakes serve as mounts for the Angulan Knights. Once a xi-drake is bound to a rider/companion, the two work in concert until death (usually the death of the rider, since xi-drakes live for hundreds of years).

Although they can be encountered on their own, xi-drakes are perhaps most interesting when used as the companions of the Angulan Knights.

Rarely, a xi-drake is outfitted with one or two cyphers or an artifact, but only if it can use the devices.[2]